About a month ago it was my husband’s birthday, and Canadian Thanksgiving. In honour (Canadian spelling because I am Canadian!) of American Thanksgiving, I have decided to share my experiment with my beloved turkey stuffing recipe!

All you really need to know about me is that, while I quite like turkey for every holiday, I LOVE STUFFING! You probably won’t ever find a ham in my oven on any holiday because you can’t fill it with delicious stuffing. And at EVERY holiday gathering where stuffing is served, I will make the same “joke” – after putting the bowl of stuffing down in front of myself, I will ask everyone else what THEY are having. So, the fact that I am diabetic and should not be consuming bread or starchy food in any significant quantities is really crimping my style.

Since my mother is also diabetic, and prone to accusing me of trying to kill her if I present too many simple carbohydrates at the holiday dinner table, I decided to put my thinking cap on and see if I could successfully reduce said carbs without inhibiting my enjoyment of my favourite holiday dish.

In our family, each generation has come up with their own version of this holiday staple. My grandmother made a very fine textured stuffing, which was delicious. My mother made a stuffing that was a bit chunkier with slightly larger bread crumbs, and added ground pork – also delicious. My traditional stuffing ended up being much like myself – “if less is more, just think how much more ‘more is more’ would be”, taking my mother’s idea of ground pork and upping that to use hot italian sausage meat, and adding rice to the mix.

My experiment this year was to use quinoa in place of the rice I usually use in my stuffing, and I am happy to say it was a success! By using quinoa, I was able to reduce the carbohydrates in the rice and up the overall protein content. That being said, it was a delicate matter getting the preferred texture of the stuffing right because cooked quinoa can be a lot more moist than rice, and has a tendency to clump together in an unappealing way.

In any case, you be the judge, and feel free to alter amounts in this ‘recipe’ – which is not something that has ever been written down before now. I said before that I LOVE STUFFING, so I will make no more excuses for making FAR more of this stuffing than is required by a gathering of 5 – 8 people! I encourage you to use this more as a jumping off point in the discovery of YOUR perfect stuffing recipe… 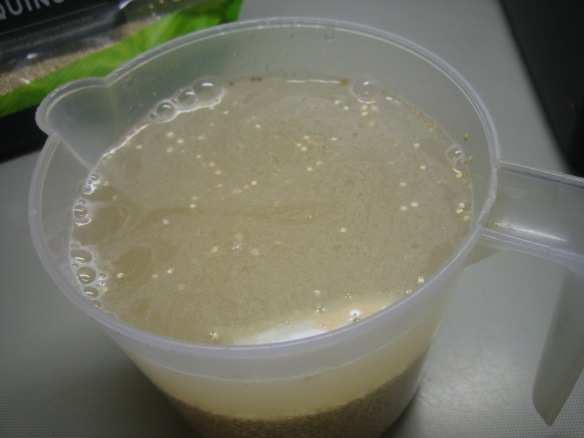 After quinoa is rinsed, drain and place in cooking pot with 2 cups chicken broth and a spoonful of butter or olive oil. Bring to a boil, reduce heat, and simmer until liquid is absorbed. Set pot aside to cool. 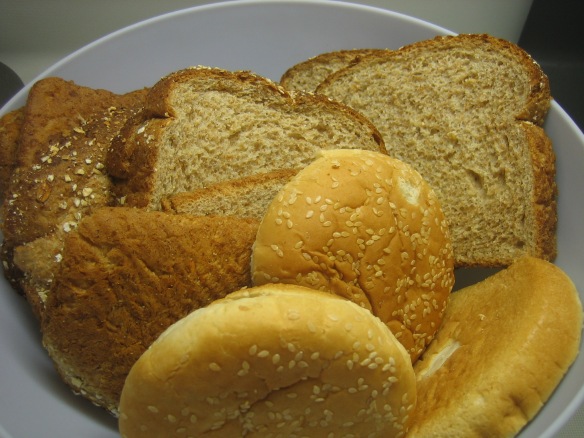 Tear bread into bite-sized pieces in a large bowl, and set aside. When quinoa is cooked and cooled, add to the bread crumbs in the large bowl, and stir to mix well. Sprinkle 2 envelopes of dried onion soup mix over the crumb & quinoa mixture, and stir to incorporate. Also blend in salt, pepper, and then dried sage and poultry seasoning to taste (depends on how much bread you use, but I add about a tablespoon or two of each). 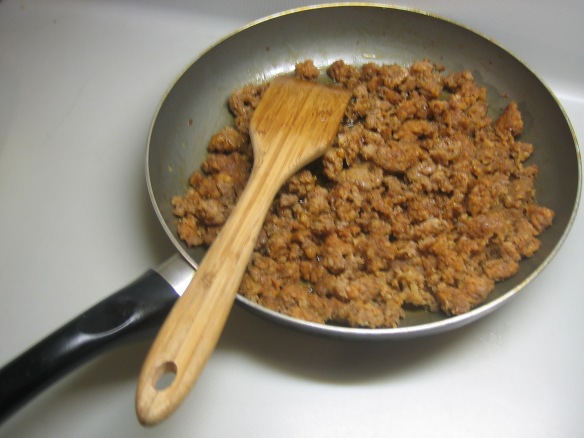 Remove sausage meat from casings and cook loose meat until browned, then add to bread crumb mixture in bowl.

Dice celery, onion, garlic, and mushrooms, and cook in a dash of olive oil or melted butter until celery is soft and onions are translucent. Add cooked vegetables to bread crumb mixture in bowl, and stir to blend evenly.

At this point, the mixture in your bowl may have outgrown your large frying/saute pan. If it looks like too much to fit into your pan all at once, you may have to divide into two batches for the next part.

*Put olive oil or butter (butter is nice at this point – adds a nice flavour to the bread crumbs) in your pan over med-high heat, and beat one egg in a small cup or bowl for each batch of bread crumbs. Add first (or all) bread crumb mixture to the heated pan, pour beaten egg over top, and then stir quickly until the egg cooks all the way through, being careful not to burn the mixture.

Once the mixture is cooked, pour into a clean bowl and let cool. If you are cooking the stuffing in batches, repeat steps from the * onward, until all of the bread crumb mixture has been cooked with the egg, adding all of the cooked stuffing to the same bowl to cool. Test and adjust seasoning if needed.

The stuffing can be prepared a day or so ahead of time and it is better that you do  – that way the mixture has time to cool down before being stuffed in the prepared turkey. You don’t want to burn your hand trying to stuff hot stuffing into your bird! Not everyone cooks their stuffing inside the bird, but we always have in our family. The stuffing is already cooked but warming inside the bird adds to the flavour. That, and who has space for anything else in their oven once the turkey goes in? 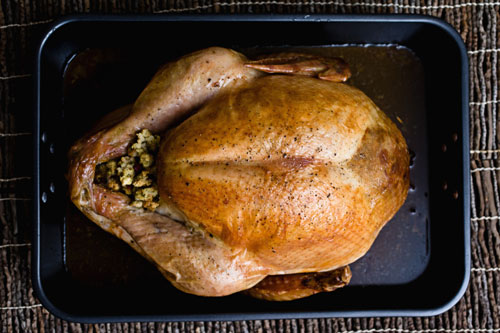 If you prefer not to use the stuffing in your turkey, gently warm stuffing for about 30 minutes or so in a covered roasting pan. Once it has warmed up, you, too, can place the serving bowl in front of your seat and ask everyone else what THEY are going to eat.